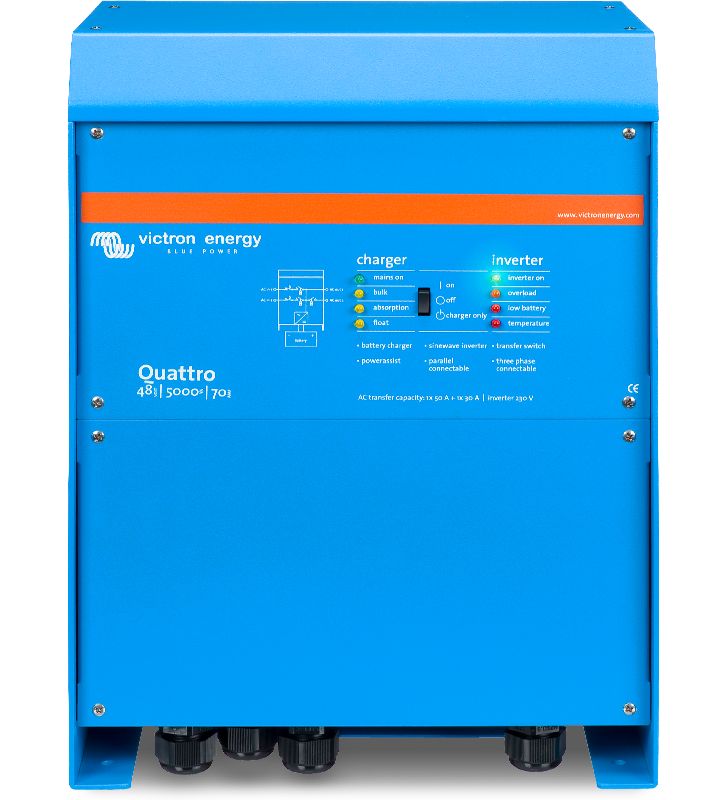 Similar to the MultiPlus, the Quattro is also a combination inverter and charger. Additionally, it can accept two AC inputs and automatically switch to the active source. It integrates various functions such as a true sine wave inverter, variable loading, PowerAssist hybrid technology, as well as various system integration features such as three-phase, dissociated phase and parallel operation.

For ESS systems with Quattro 48/15000 it is mandatory by law to use the Ziehl Anti-islanding relay UFR1001E.

The Quattro can be connected to two independent AC sources such as the dock mains and a generator or to two generators. Quattro automatically connects to the active source. The main output has a “no-break” function (without interruption). In the event of a failure in the electrical network or the wharf electrical network or the generator being switched off, the Quattro takes over the power supply to the connected appliances. This is so fast (less than 20 ms) that computers, or other electronic equipment, will continue to work without interruption. The second output is only active when AC power is available at one of the Quattro inputs. Devices that do not discharge the battery, such as an air conditioner or a boiler, can be connected to this output.

Up to six Quattros can be run in parallel for greater power output. Three-phase or dissociated phase operation is also possible. Consult our technical data sheets to see which models are capable of parallel, three-phase and dissociated phase connection.

When connected to a GX device (eg Cerbo GX), you can monitor and control your Multi and systems locally (LAN) or remotely via the Internet, anywhere in the world, with the free VRM application and the free VRM portal site . It can be accessed through a mobile phone, tablet, laptop or computer in various operating systems. There are no limits on the level of control, from configuring the Multi to automatically turning on a backup generator, among many other options.”